The Optimistminds editorial team is made up of psychologists, psychiatrists and mental health professionals. Each article is written by a team member with exposure to and experience in the subject matter.  The article then gets reviewed by a more senior editorial member. This is someone with extensive knowledge of the…

In this worksheet, we will look at eating disorders and trending memes in order to understand if they are necessary or just a means of provocation. Other topics included in this article include; types of feeding and eating disorders, coping skills and stats concerning eating disorders

Yes, eating disorder memes are necessary. Viewing memes from different perspectives can render them either helpful or provocative. In this case, a negative perspective will result in a different understanding of the meme as compared to a positive one. This article will look at how memes can be a source of comical relief, eating disorders, education, motivation, and inspiration.

What are eating disorders?

According to the Diagnostic and statistical manual of mental disorders fifth edition (DSM-5), there are six types of eating disorders. Obesity is no longer included as an eating disorder since it results from long-term excess energy intake relative to energy expenditure.

A range of genetics, physiological, behavioural, and environmental factors that vary across individuals contribute to the development of obesity; thus, obesity is not a mental disorder. (Diagnostic and statistical manual of mental disorders fifth edition 2013).

The six eating disorders are;

Rumination is an eating disorder characterized by spitting up digested or partially digested food from the stomach, re-chewing the food and either re-swallowing or spitting it out. It tends to occur within 30 minutes of every meal. The causes of rumination remain unknown. Eating disorder memes on rumination tend to focus on illustrating the urge to regurgitate food.

Formally referred to as selective eating disorder, is an eating disorder characterized by intense restriction or selection of food consumed. Unlike anorexia nervosa, people with this eating disorder are not interested in their body image, shape or size.

Usually begins during the teenage and early adulthood years. It is more common in women than in men.

Anorexia is the most deadly mental illness. One study found that people with anorexia are 56 times more likely to commit suicide than people without an eating disorder. (Eating Disorders Coalition, 2016).

Is a mental disorder characterized by binge eating (consuming large quantities of food over a short period of time) followed by calorie reducing strategies such as purging (induced vomiting), fasting or excessive exercise.

Causes include genetic factors, psychological factors such as personality, dieting and societal pressure.

One of the most discussed eating disorders in memes, binge eating is an eating disorder characterized by consuming large amounts of food over a short period of time, and feelings of being unable to stop eating even when full. It is the most common eating disorder with a prevalence of  5.5%.

Symptoms include; eating large amounts of food over a short period of time, eating even when not hungry, feeling that your eating behaviour is out of control, eating until you are uncomfortably full, eating in secret, eating alone and feelings of depression and guilt.

Unlike people with bulimia, binge eaters are not concerned with weight reduction through vomiting, using laxatives or excessive exercise and can thus suffer from other physical conditions such as obesity.

It is more common in women than in men and usually begins during early adulthood. Causes include dieting and psychological issues such as depression and low self-esteem. 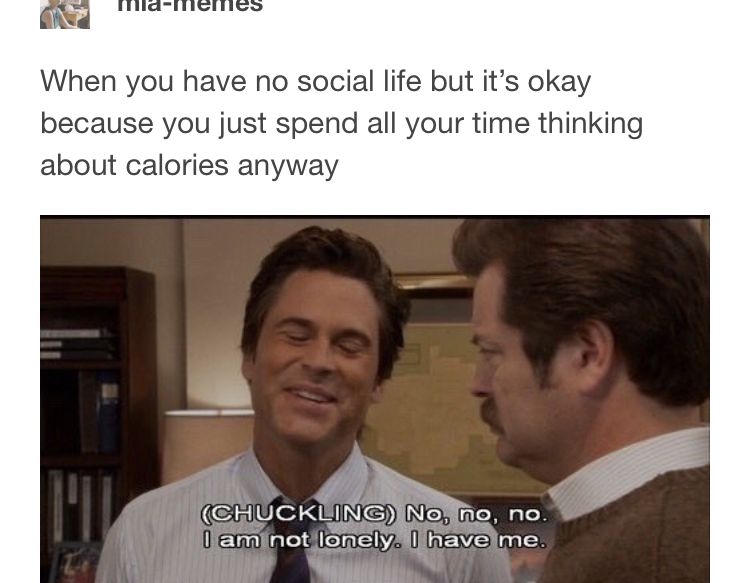 In this article, we covered what eating disorders are, discussed the six eating disorders in length as well as compiled a couple of entertaining memes that we hope you found useful to share with your friends and family.

If you have any questions, feedback or comments, feel free to let us know.

What eating disorder has the highest death rate?

Anorexia nervosa is a common eating disorder with the highest mortality rate of all psychiatric diseases.

Do eating disorders shorten your lifespan?

Individuals with an eating disorder, such as anorexia or bulimia, have a significantly higher risk of dying prematurely, compared to other people, UK researchers reported in the Archives of General Psychiatry

How do I stop being obsessed with food?

Stop focusing on what you CAN’T eat. Don’t create a list of ‘forbidden’ foods as this is only going to want to make you crave them more. The brain can only focus on one this at a time. So start thinking about the foods you add into your diet. (Cohen, n.d.)

While eating disorders can be lifelong, with the right care, you can get into recovery in four-eight weeks.

How many calories do you lose when you throw up?

FACT: Research has shown that vomiting cannot get rid of all the calories ingested, even when done immediately after eating. A vomit can only remove up to about half of the calories eaten – which means that, realistically, between half to two-thirds of what is eaten is absorbed by the body. (CCI, 2018)

What are 3 examples of disordered eating behaviors?

Why do narcissists always play the victim role?

Does Lexapro cause loss of appetite?

What is Thermophobia? (An Overview)

Late twenties Depression: (Why and how to deal)

Xanax makes me depressed. (Yes or No)

Can you use Citalopram and Duloxetine together? (3 research studies)

Did Allison Williams have an eating disorder? (3 types of stigma)

What are the tips to deal with greyhounds separation anxiety?